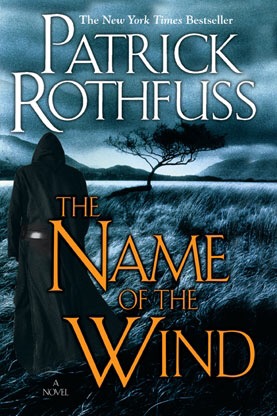 There is a silence which follows Kote the innkeeper. The root of the silence is in the stories of Kote’s youth, when he was known as Kvothe the Bloodless, Kvothe the Kingkiller, Re’ Lar Kvothe of the Arcanum. He is finally willing to tell his story, from his childhood days in a troupe of traveling troubadours, to the death of his childhood and his struggles at the University; even the tale of his one great love. He’ll tell it all, now that the renowned Chronicler is here and ready with his pen. But the silence still haunts Kvothe’s every step, death still lingers on the doorstep, and dark, treacherous hints of magic are beginning to seep into Kvothe’s little backwoods town.
Patrick Rothfuss has been hailed as a world builder to rival the grand master Tolkien himself. My first exposure to the Kingkiller Chronicles lived up to those rumors. Languages, cultures, histories, and religious traditions flow through this book like a rain-gorged river. In the dedication, Rothfuss thanks his mother for teaching him the love of story, and his father for teaching him to take the time to do things well. When it comes to the creativity and depth of this fantasy series, Rothfuss must be acknowledged as a crazy great.

That being said, this book was a struggle for me, from beginning to end. Rather than argue with the loud protests of many fellow readers whom I hold in the highest respect, I’m going to put my ardent dislike of this book down to a matter of interpretation and personal taste. Rothfuss did indeed take the time to build his story very carefully, although I could have done with a few less redundant descriptions and cliché euphemisms (a sigh should only “deflate” a character once, not three times in a single scene). But the real crux of my problem with Kvothe as a character and Rothfuss’ choice of narrative style was the myopic, pompous, exclusive tone that ran rampant throughout. (Before you turn red in the face and start stabbing your keyboard to decry this less than positive reader response, please refer back to the disclaimer at the beginning of this paragraph.)

I will give one example of my complaint before I leave this alone and move on to other reads. Ok, two examples.

Toward the end of the book (no spoilers here), Kvothe opens the case of an instrument so that it can “feel a little sun on its strings”. He goes on to tell the reader that he doesn’t expect anyone who isn’t a true musician to understand why he did this. I scoffed aloud. It would have been so simple a thing, the most minute of shifts in the semantics, for the narrator to express this same sentiment with an air of inclusiveness instead of exclusiveness. He could have said, for example, “Anyone who has had a long and intimate relationship with a musical instrument will understand.”

If this was a one-time choice of phrasing, I could be quite legitimately accused of nitpicking. But of course, it wasn’t. I got so fed up with the words “I don’t expect you to understand” by the end of this book, I considered making it a drinking game. But then, I’ve got responsibilities to tend to and taking that many shots in a given day cannot be good for one’s health.

In addition to the grating hubris of the narrator, the character Kvothe was a quintessential “Gary Stu”.

A Mary Sue for female characters and Gary Stu or Marty Stu for male characters is an idealized and seemingly perfect fictional character, a young or low-rank person who saves the day through unrealistic abilities. Often this character is recognized as an author insert and/or wish-fulfillment.

Kvothe is a wunderkind from the very start: supernaturally intelligent and mature for his age, blessed not only with survival skills most eleven year olds have never even heard of, but also with a knack for acting, music, languages, dialects, horse taming… Oh, and he knows EVERYTHING. Any time any question in any field of study or social etiquette or street wisdom arises, this kid knows the answer. Every. Time. The only people who don’t like him are either ignorant or straight up two dimensional bad guys. He’s the guy the ladies love and the haters love to hate.

Ok I’m done. So sorry guys. Maybe I’ve grown cynical in my middle age, but this was just not for me.

4 thoughts on “Book Review: The Name of the Wind by Patrick Rothfuss”